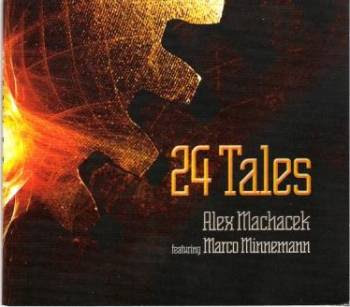 Drummer and percussionist Marco Minnemann, who is touring with Adrian Belew right now, offered a fifty minute drum track / improvisation to various musicians, and asked them to compose music to it.
Having a déjà vu? Well, that's probably because Mike Keneally was one of these artists. The Keneally / Minnemann collaboration was entitled "Evidence Of Humanity" and got released on MK's Exowax label a little while ago.
Austrian guitar wizard Alex Machacek was one of the other artists that received Marco Minnemann's question.

"24 Tales" is a beautiful, contemporary jazz / fusion album with a lot of zappa-esque twists and clusters.
I think this is a great album. It reminds me a lot of FZ's "Jazz From Hell" !!

Love the titles as well. There's 'Eau de Conlon', 'Anamika' and 'Sweet Torture' that might give you some clues, but there's also the 'Minnemaus in da House' (which even has some vocals).
Fun. Love it.