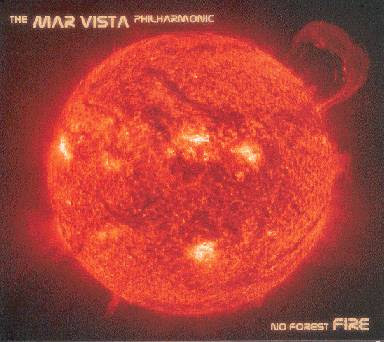 August 22, 2002, a select group of musicians gathered in Arthur Barrow's studio for an occasional improvisation / jam.
These kind of free form sessions have been taking place in Arthur Barrow's Lotek Studio every now and then since the early ninetees. As Arthur Barrow stated in his liner notes, the MVP jams got their start as a memorial musical get together shortly after Miles Davis died.
Most noteworthy about this August 2002 event, is that Vinnie Colaiuta joined the group that particular night.

It is hard to imagine that the music on "No Forest Fire" is the unedited recording of the music that was played that evening. This is top notch.
And I'm not just saying this because most of these guys have played with Frank Zappa. This is great music.

The four long pieces that you can find on "No Forest Fire" will take you on a journey. Great melodies and solos emerge as the pieces develop. The setting and the improvisations makes one think about Miles Davis' bands, while the backing (rhythm & horn section) smell like Zappa.