ALL TOMORROW'S PARTIES - THE DVD 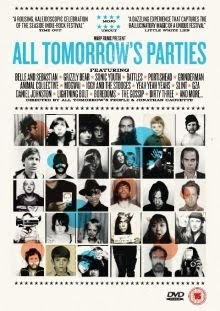 All Tomorrow's Parties is an alternative music festival that takes place in the UK.
Ever since 1999, the festival has lend the stages to an international selection of experimental, avant-garde and alternative rock music.
The All Tomorrow's Parties DVD is a collection of movies (by professional crews, but also by cameras and cellphones of audience members) that will give you an idea of what ATP is all about. The festival is not just about great music, but it also focusses on the interaction between the artists and the audience. The DVD shows how the musicians stay in the same accommodation as the fans, how musicians jam at the 'camping site', and how they interact.
It's a long list, but you should be impressed by the number of artists that are featured in this film: Belle And Sebastian, Grizzly Bear, Sonic Youth, Battles, Portishead, Daniel Johnston, Grinderman, Lightning Bolt, David Cross, Animal Collective, The Boredoms, Les Savy Fav, Mogwai, Octopus Project, Slint, The Dirty Three, Yeah Yeah Yeahs, the Gossip, GZA, Roscoe Mitchell, Seasick Steve, Iggy and the Stooges, A Hawk and a Hacksaw, Fuck Buttons, Micah P Hinson, Two Gallants, Mars Volta, Akron/Family, Jah Shaka, Saul Williams, Shellac, Patti Smith and John Cooper Clark...
"All Tomorrow's Parties" is a fine documentary about an exemplary festival.
Geplaatst door UniMuta op 2:53 AM