PIERRE VERVLOESEM - NOT EVEN CLOSE 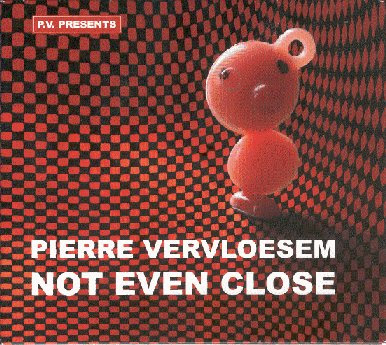 Last year, the Off Records label released the latest Pierre Vervloesem album.
Pierre Vervloesem, as you should know, is a belgian guitar player and producer. "Not Even Close" is his seventh solo album, but his contributions can be found all over the belgian music scene: Flat Earth Society, X-Legged Sally, dEUS, and more.
Check out http://www.pierrevervloesem.be/.

"Not Even Close" is one big surprise. Pierre is a guitar player, and yet, you cannot hear one single guitar note on this album. I was told by Pierre that he linked his guitar to a synthisizer and that he recorded all the parts that way. It probably took a lot of sound modifications (or 'knobs twiddling' as the liner notes say), but the result is great.
The album sounds like it was recorded on a Synclavier. Very impressive.
And the music is even better. There's a lot of Zappa influences on this disc: quirky melodies, angular rhythms and funny as hell. I love it. A lot of great music and a lot of variation. I wonder what this music would sound like if it was to be played by a band.