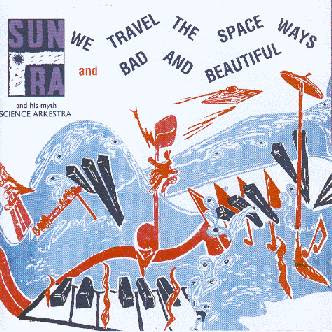 So what do you do when you have a day off from work?
Tough question?

I don't know. My day started with the fabulous Sun Ra and his Myth Science Arkestra, zapping me back to the late fifties. The "We Travel The Spaceways" and "Bad And Beautiful" CD that I listened to this morning, is a reissue of two album that initially got released on Sun Ra's private Saturn label. "Spaceways" got released in 1966, and "Bad And Beautiful" in 1972.
"Spaceways" includes material that got recorded during Sun Ra's last years in Chicago. It's classic big band jazz: melodic swing, directed by Sun Ra's piano, and with some great horn solos.
"Bad And Beautiful" presents tracks from 1961, which means that the band had moved to New York City. It's a much smaller band. Lots of room for Sun Ra's piano and for the Arkestra. Check out Marshall Allen, John Gilmore, Pat Patrick, Ronnie Boykins and Tommy Hunter!!