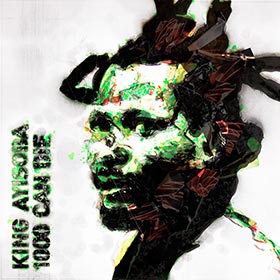 Record producer Zea added :
Guests brought new facets to some of the tracks. The trailblazing Nigerian saxophonist Orlando Julius adds a raw, reedy quality to “Dapagara,” while on “Wine Lange,” the only song not to feature kologo, Sakuto Yongo’s one-string gonju fiddle takes the music into a different, ancient dimension. The title cut features Ghanaian rapper/producer M3nsa alongside the shape shifting vision of legendary reggae producer Lee ‘Scratch’ Perry. ‘We met Scratch in Amsterdam airport,’ Zea remembers. ‘He and Ayisoba grabbed each other’s attention. We had a short talk, and they decided to do something together. It wasn’t planned. We already had M3nsa’s part on the track when we sent it off. That song created itself.” “1000 Can Die” builds into a sonic epic; after that the all-acoustic “Grandfather Song” arrives like a plunge into deep water. “It’s a preaching,” Ayisoba explains. “You can never cut the small stone. This means you have to stay strong, when you are big or small, they can never cut you when you are a stone.”