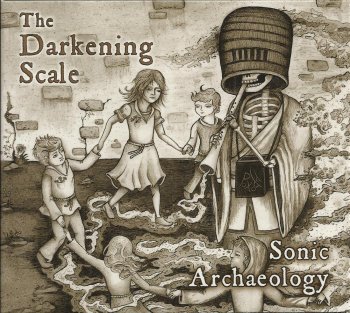 The Darkening Scale is the solo project of David Janssen (from Renaldo and The Loaf). It started in 2006 when RATL was on hold.

David Janssen adds :
"Sonic Archaeology was the second Darkening Scale (originally the album was in 3 long chunks and, amazingly, Stuart Maconie played the whole of Part 1 on his Freak Zone radio programme). As with the Klanggalerie version of "The Entomology of Sound", this version of "Sonic Archaeology" is very different to the original version. Of the 15 tracks, 4 are completely new, and one, I have no memory of recording! The remainder of the tracks are drawn from "Sonic Archaeology" and "The Songs of Langtuhn Hemblu", again, many have been reworked, remixed and re-edited. One, 'Desperate Griper', has a surprising new vocalist."

I received a copy of this album as a gift from a friend at The Residents' concert in Leuven a little while ago. Beautiful package. 6-panel digipack with very recognisable (slightly frightening / disturbing) artwork by Poxodd. Looks great.
The first listening session was during the ride back home from that very same concert and I've listened to it again on numerous occasions during the last couple of months.
In the liner notes, David says : "No musical instruments were harmed whilst making this recording" which I find hard to believe. I'm not saying that it's not true. I'm just very impressed.

Electronic / adventurous music.
I think it's great.
Give it a listen (and do try track number 9 : 'T For Tuva').

Email ThisBlogThis!Share to TwitterShare to FacebookShare to Pinterest
Labels: renaldo and the loaf