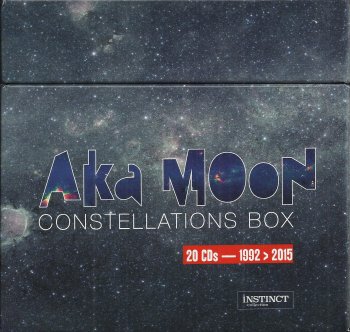 The Outhere Music record label has just released the brand-new "Now" album by Belgian jazz trio Aka Moon.
And as if that wasn't enough reason to be (extremely) happy, Outhere has also issued a 20 (twenty !!) CD Box to celebrate 25 years of Aka Moon.
"Constellations" presents 19 previously released Aka Moon albums (= their complete output, except for the "Live At The Kaai" album from 1999), plus one disc with an unreleased album from the late ninetees: "Light Ship Trio".

What a beautiful way to celebrate 25 years of Aka Moon.
One word : Wow !!

Here's how they celebrated their 20th anniversary at the Jazz Station in Brussels :

Email ThisBlogThis!Share to TwitterShare to FacebookShare to Pinterest
Labels: aka moon