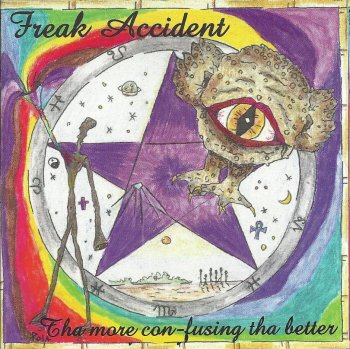 A couple of months ago, the Muze Jazz Club in Heisden-Zolder (BE) announced a reunion concert of Freak Accident. Unfortunately, the concert could not happen, but the same announcement mentioned that the band was influenced by the music Frank Zappa, and that they had released an album in 1999.
Reason enough to investigate.

I was happy to find the album on Bandcamp, but I'm even more happy to have found a copy of the actual CD.

Freak Accident was a Belgian 5-piece band. The third place in the Limbomania music contest in 1997 got them a record deal : "Tha More Con-Fusing Tha Better". The band was fronted by Marco Cirone, who you also might know as the guitar player from The Muze Jazz Orkest. The latter toured with a Zappa program in 2013.

The album is pretty good. In good Zappa-tradition, all the compositions are linked and tell a bizarre story.
Zappa-esque progressive rock with lots of humour. Love it.