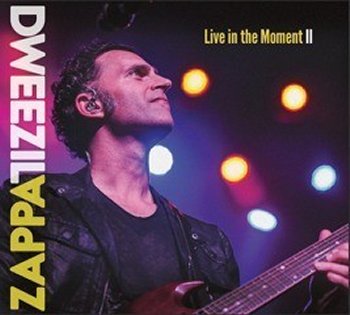 Those of you (of us) who took part in Dweezil campaign to support his new album, "Live In The Moment II", received a digital copy of the album last week.

A beautiful selection of live guitar tracks.
This is an excellent release.

As Dweezil says in the liner notes:
“Live In The Moment” series of records is my homage to my father’s “Shut Up And Play Yer Guitar” album. On that pivotal album he compiled his favorite solos from his concert tours and sandwiched them together between assorted palette cleansing interludes in a way that can only be described as Zappa. The main focus of the record was his idiosyncratic guitar playing. He had an extraordinary ability to spontaneously compose with his guitar. His vast rhythmic and harmonic vocabulary allowed him to react to the music and create what he called “Air Sculptures.” I am grateful that he captured those stunning works of art and I am still mesmerized by them all these years later. Some of you reading this actually got to see those guitar performances live! Those excerpted solos took on a life of their own and stand alone as unique compositions. His ingenious playing coupled with his highly evolved guitar tones was the ideal delivery system to tantalize our senses. Both the playing and the tones from that record remain a huge daily inspiration to me.

"Live In The Moment II" includes four compositions by Frank Zappa. All the other compositions are by Dweezil.
Beautiful.
This is what making Air Sculptures is all about.