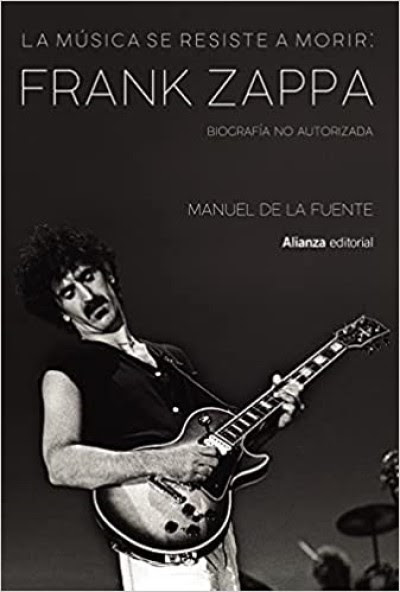 Manuel de la Fuente is professor Audo-Visual Communication at the Valencia university.
His "Frank Zappa - Music refuses to die" got released by the Alianza publishing house about a week ago.
In 2014, Manuel did the translation for the Spanish version of The Real Frank Zappa Book. In 2016, he translated Pauline Butcher's book.
"Frank Zappa - La Música Se Resiste A Morir", 492 pages.
Based on interviews with his collaborators and the consultation of thousands of documents in US collections, this unauthorized biography (the first on Frank Zappa in Spanish) offers a non-judgmental portrait of the iconoclastic musician and his time. In its pages we witness the echoes of the artistic avant-gardes, the influence of Zappa in the activist counterculture, the gestation and development of his abundant work, as well as his confrontations with record companies and puritan organizations. A landscape where the Beatles, Bob Dylan and Jimi Hendrix coexist with Edgard Varèse and Pierre Boulez, observed with the incomparable sarcasm of a unique artist, whose legacy offers us infinite keys to understand our present.
https://www.alianzaeditorial.es/libro/libros-singulares-ls/la-musica-se-resiste-a-morir-frank-zappa-biografia-no-autorizada-manuel-de-la-fuente-soler-9788413622699/
Geplaatst door UniMuta op 1:54 AM