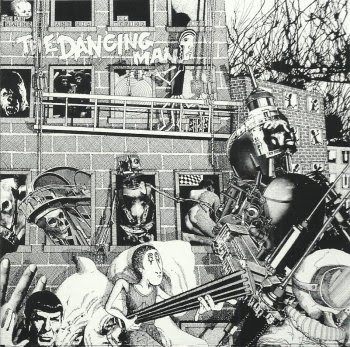 The trio that is featured on this recording consists of Jean Chaine (bass and vocals), Markus Stauss (saxes) and Dimthingshine (drums).
Jean Chaine is a fabulous bass player. He has worked with Gary Lucas and with David Moss. He also recorded a Don Van Vliet composition on one of his solo albums.
Markus Stauss is a top saxophone player in the improvised jazz scene. He was the man behind 'Trank Zappa Grappa In Varese' with Michel Delville, but also behind Zauss and Spaltklang.
Dimthingshine's real name is Jim Rite. I'm not familiar with him, but the drumming is great.

As one might expect from the beautiful album cover (it's a fold-out), "The Dancing Man" presents a mixture, a potpourri of different elements.
Experimental jazz, funk, progressive rock, improvised music, an Albert Ayler composition,... It's all there.

"The Dancing Man" is a very entertaining album. My favorite track is 'Outputblues', a composition where an unleashed Markus Stauss plays a superb solo agains a tight and funky rhythm section.