THE ARISTOCRATS - BOING, WE'LL DO IT LIVE 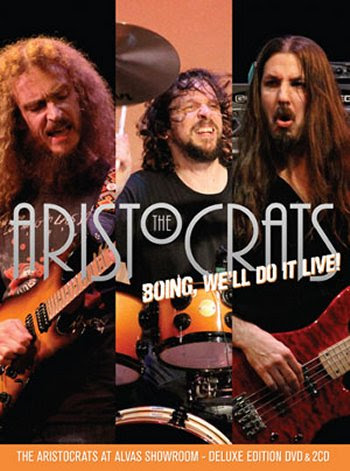 Yesterday, one day before Christmas, the brand-new Aristocrats album arrived.
The Aristocrats are Guthrie Govan on guitar, Bryan Beller on bass and Marco Minnemann on drums. I'm pretty sure that I've talked extensively about all three musicians on numerous occasions. Every project that involves one of these musicians is always worth to be checked out.
Guthrie Govan is a Guitar Techniques magazine instructor and has released the fabulous "Erotic Cakes". Bryan Beller has recorded and performed with Mike Keneally and with Steve Vai just to name two, and has also released three very fine solo albums. And then there's Marco Minnemann... Marco has given drum clinics with Terry Bozzio and Chad Wackerman. He has recorded and toured with Mike Keneally and with Eddie Jobson. And (!!), he's the man behind the fabulous Normalizer 2 Project.
Just to say that they are top notch musicians.
The icing on the cake, however, is that besides their incredible technical abilities, these guys are great composers as well.
If you're in to instrumental progressive, melodic rock music à la Mike Keneally and Steve Vai, you definitely need to check out The Aristocrats.

"Boing! We'll Do It Live" is the band's second release, following their self-titled debut from 2011.
It's availabel as a 2CD audio set, as a download, and as a deluxe DVD/2CD set.
It's a must-have.