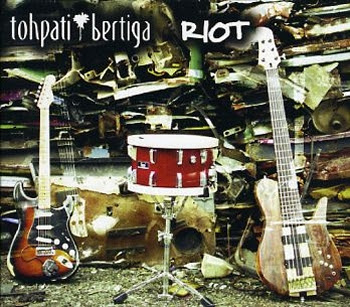 Tohpati has a new album out. It's his second one on the Moonjune Records label and it's called "Riot".

I like what Tohpati does. I think his work with simakDIALOG is very impressive and I value his solo projects even more.
"Riot" sounds quite different compared to Tohpati's previous solo release, "Save The Planet" (MoonJune, 2010).
The album kicks off with a rather sharp sounding 'Upload', an eight-minute, powerful, almost aggressive track. Impressive.
'I Feel Great', the second track on the disc, has a funky rhythm, but still has the same energy-level. I love the parts that are played in unison by the guitar, bass and drums.
The title track, 'Riot', continues in the same vain: a heavy guitar attack, complex rhythms and great solo lines.
'Middle East' is one of my favourite tracks on "Riot". Instrumental, guitar orientated progressive rock at its best.
Track number six, 'Pay Attention', takes you for a fusion ride. The assertive playing that you get in the first three tracks has made room for a warmer sound. The speed and the energy level, however, are still top. 'Pay Attention' also has a great bass solo by Indro Hardjodikoro.
With 'Rock Camp', the trio takes a side road: bluesy licks & rock vamps, but if I had to pick one track, it would be 'Absurd'. Beautiful lines by the trio, pushing the boundaries of melody & rhythm. This is great.
Next up are 'Disco Robot' and 'Lost In Space'. 'Lost In Space' lowers the tempo and delivers a beautiful melodic ballad.
"Riot" ends with 'Bertiga', not only the name of the track but also of the trio. A perfect visiting card.

On "Riot", Tohpati mixes rock, jazz and fusion. It is an impressive album.
Recommended listening.