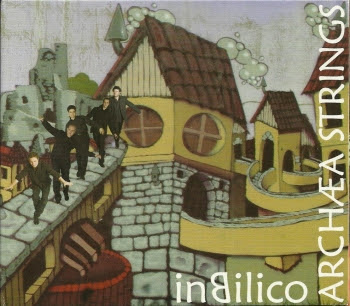 The Archaea Strings ensemble has a classical setting: three violins, a cello and a contrabass.
The quintet performs Frank Zappa's 'Alien Orifice' on their "In Bilico" album. It's the first track on the CD.

The ensemble has Damiano Puliti on the cello. A name that you might remember from the Harmonia Ensemble. His 'Frank Lesson', a Zappa tribute that's on the "Harmonia Plays Zappa" album, is also performed by Archaea Strings. And the ensemble recorded a composition by his Harmonia-colleague Orio Odori as well.

"In Bilico" offers en ensemble playing and mixing rock, jazz and classical music. Nice.
I love their rendition of 'Alien Orifice' and it's great to hear Damiano Puliti's 'Frank Lesson' by the string quintet.


I would have liked a link to their fine version of 'Eleanor Rigby', but 'Rock Reel' and 'Frank Lesson' will give you an impression of what they sound like.