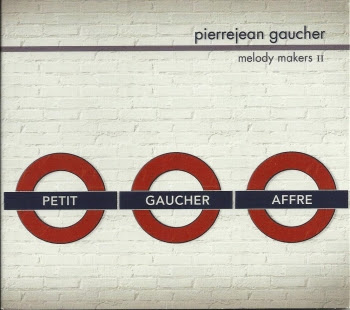 Searching for a new sound, a new project, Pierrejean Gaucher brought us "Melody Makers" in 2009, an album that he made with Clément Petit and Cédric Affre. The trio performed classic pop tunes in jazzy arrangements. The combination of a jazz guitar, a cello and drums was quite remarkable.

And now there's the sequel: "Melody Makers II".
This time, the album consists of original compositions, inspired by various pop tunes.
The biggest difference, however, is that the compositions were co-written by Pierrejean Gaucher and Clément Petit. On the bonus video that you find on the album, Pierrejean explains that his mind had to shift from working in a Zappa-way (total control) to a more Lennon/McCartney-approach (co-writing). He adds that the writing process is more demanding, but that the results are compositions that are richer, stronger and more innovative.

The result sounds great. The trio has a sound of its own. There's a link to the pop melodies, you get the jazz arrangements and jazz guitar solos, all in balance with the lyrical and powerful sound of the cello. Add the drums to keep it tight and you get "Melody Makers II".

Here's the first five minutes of the 15-minute video that's included on the album. It'll give you a good idea of what it sounds like.