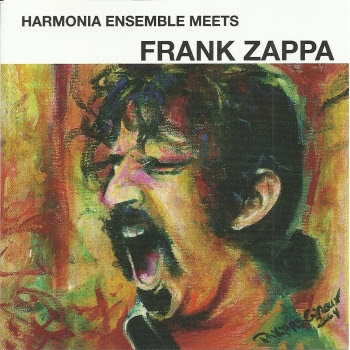 The Italian Harmonia Ensemble released their "Harmonia Meets Zappa" album in 1992. The album got released by Materiali Sonori, the same label that also published the remarkable "Sonora 4/94" magazine: a Frank Zappa special that came with a beautiful CD of renditions of Zappa pieces and tributes by various Italian musicians.

The "Harmonia Meets Zappa" CD quickly sold out and got re-released in 2002 with two extra tracks. Shortly after the ensemble's memorable Zappanale concert in 2007, the album got a second re-release. This time, with a slightly diffent title, plus a different album cover: a "Chunga's Revenge" painting by Philippe Giroux.
The music on the album is a mix of Zappa-inspired pieces by Damiano Puliti and by Orio Odori, and of beautifully arranged Zappa pieces.

This album belongs in every Zappa collection, next to The Ensemble Ambrosius, The Ed Palermo Big Band and LeBocal. The below live fragments will tell you why.
Essential !!
Zappanale, 2007