ALLAN HOLDSWORTH - NONE TOO SOON 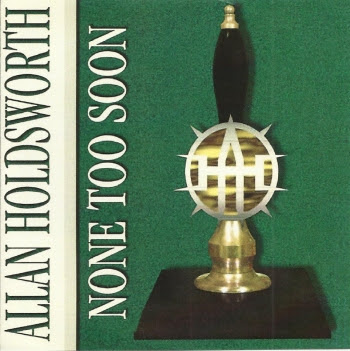 On "None To Soon", Allan Holdsworth interpretes a number of jazz classics (Coltrane, Django Rheinhardt, Bill Evans and Joe Henderson), and Irving Berlin tune, two compositions by British jazz pianist Gordon Beck, and a classic Lennon / McCartney pop song.
In the liner notes, Allan Holdsworth says that it's his close friend Gordon Beck who convinced him at the time to make 'an album that people might be able to releate to'. Most of the pieces were picked and arranged by Gordon Beck. Allan admits that he wasn't familiar with all of the tunes, but that his approach to playing and to soloing was the same as on his previous albums.

The result is astonishing. This is not just an album of coverversions. Each and every song gets the Allan Holdsworth treatment: it's like the complete song structure got teared apart, and got build up again. The arrangements are great and the soloing is superb.
Excellent stuff.

The album got released in 1996, but has been out of print for quite a while.
Moonjune re-released this gem earlier this month, together with "Hard Hat Area".
Perfect twins. Essential listening.
www.moonjune.com