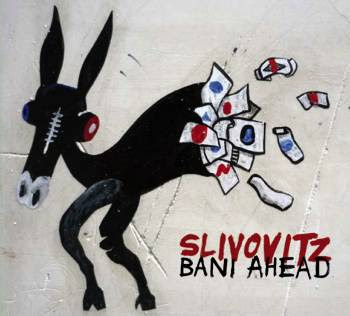 Dear friends and relatives, the new Slivovitz album has arrived !
With "Bani Ahead", Slivovitz has released their third album. Their second on the MoonJune Records label.

Mixing angular, polyrhythmic progressive-rock with balkan influenced melodies and jazz solos, Slivovitz has developed a typical and recognisable style. Add to this the beautiful instrumentation (guitar, bass, drums, trumpet, sax, violin and harmonica) and you might get an idea of what to expect from this italian septet.

'Egiziaca', the opening track, immediately sets the tone. This is fun. The song rocks and includes a fabulous harmonica solo. Wow.
'Cleopatra Through' is another composition by sax guitar player Pietro Santangelo. The trumpet and the saxophone play the melody line and violinist Riccardo Villari takes the solo. Great.
The third track, 'Fat', is composed by bass guitar player Domenico Angarano and it's my favourite track. It combines a beautiful lyrical melody with fun solos by guitarist Marcello Giannini and harmonica player Derek Di Peri.
'Vascello' was penned by Marcello Giannini and takes a more jazz direction. Quirky stuff. I love it.
The album continues with '02-09' (Giannini). The tracks starts rather slow and quiet, but quickly turns into the most energetic composition of the album. And it's Pietro Santangelo (on sax) and Ciro Riccardi (on trumpet) who play the solos.
'Opus Focus' (Santangelo) actually is the shortest track on the album. It's a short, sweet and calm, almost solo, saxophone piece.
Next up is the title piece 'Bani Ahead' (Santangelo). This time, the focus lies on the Balkan influences.
And the disc ends with Marcello Giannini's 'Pocho'. Again, a song that combines polyrhythms, a beautiful melody and an impressive solo.

"Bani Ahead" will invite you to multiple listening sessions. I have listened to the album at least five times since last week, and it keeps putting a smile on my face.
Fans of angular, zappa-esque progressive or jazz-rock music will not be disappointed.

And be sure to read the interview with Pietro Santangelo
(http://www.moonjune.com/blog/9.08.11_interview_slivovitz/)