JONATHAN DAVIS AND THE SFA - ALONE I PLAY 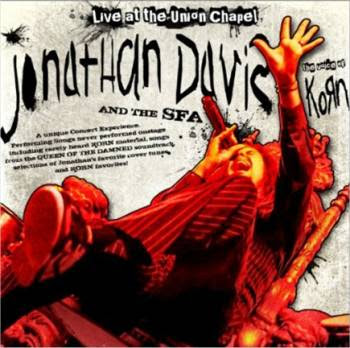 More data are being pasted into the United Mutations Archives.
Lead singer and frontman of metalband Korn, Jonathan Davis' solo project is entitled Jonathan Davis and the Simply Fucking Amazings. To date, the band has released two albums: "Alone I Play" in 2007, and "Alone I Play / Live At The Union Chapel" in 2011.
The SFA band features Lakshmirnarayana Shankar, the violinist who performed and recorded with John McLauglin in the early seventies, and who recorded his first solo album on Frank Zappa's record label.
For my taste, this Jonathan Davis album is OK, but I would have liked to hear a bit more of Shankar (or Shenkar as he calls himself nowadays).

Here's a bit of Lakshmirnarayana Shankar from 1985 !!