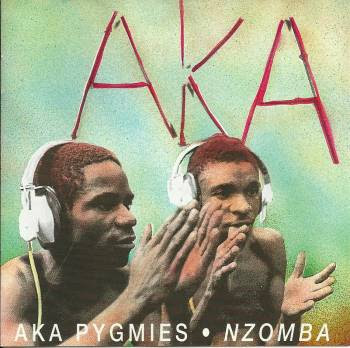 Saxophonist Fabrizio Cassol, bassist Michel Hatzigeorgiou, and drummer Stéphane Galland are the founding members of Aka Moon, a Belgian avant-garde jazz band. All three were already active musicians playing in various groups including the Nasa Na Band (with guitarist Pierre Van Dormael), but came together to record as Aka Moon after spending some time in the Central African Republic studying the musical habits of the native Aka pygmies tribe.
In 1992, they released their first album, inspired by the methodology that the pygmies used in creating their music. It was the first release on the late Carbon 7 label.

The second Carbon 7 release, was a collection of recordings of the Aka Pygmies that had inspired Fabrizio Cassol, Michel Hatzigeorgiou and Stéphane Galland to record as Aka Moon.
These recordings were made by Fabrizio Cassol during their visit to the Central African Republic.
Consider the first Aka Moon album and this Aka Pygmies album a twin release.