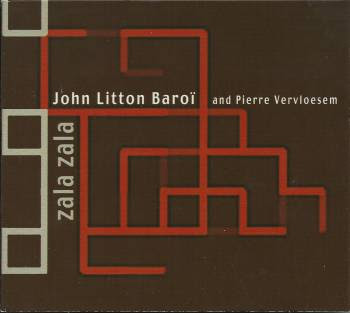 A bit over ten years ago, the Brussels-based Carbon 7 label released an album by John Litton Baroï.
John Litton Baroï was born in Bangladesh but lived in Brussels at the time. I don't have a clue where he lives nowadays. He might still live in Brussels. I don't have a clue.
"Zala Zala" featured Pierre Vervloesem who played a lot of freaky guitar, who also arranged all of Baroï's songs and who produced the disc. Besides John Litton Baroï and Pierre Vervloesem (who also played the bass), the album also featured Sandip Bhattacharva on tablas, Peter Vandenberghe on keyboards, and Didier Fontaine on very powerful, machine-like drumming.

Pierre Vervloesem's influence is very present. Presenting this album as a Baroï / Vervloesem collaboration was the least that they could do.

Picture and data have been added to the United Mutations Archives.