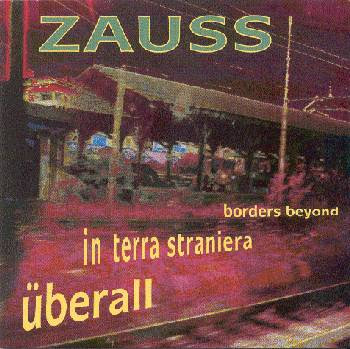 Put Italian guitar player Francesco Zago and Swiss saxophone player Markus Stauss together and you get Zauss.
You might know Francesco Zago as the man behind italian chamber rock band Yugen, where he mixes classical music and progressive rock. And Markus Stauss has been mentioned a number of times in this blog as he is one of the driving forces behind Trank Zappa Grappa In Varèse? with whom he performs the music of Frank Zappa alongside his own compositions.

"Überall" shows that both Francesco and Markus have no borders in music. The first track, 'Hymn' sounds like a slow classical piece. Francesco's use of the volume pedal (or knobs) and Markus' low notes on the saxophone makes you think that you're listening to an old organ. The second composition, 'Senza Nessuna Eleganza' takes you to the other side of the musical spectrum as it is a very contemporary sounding, free, maybe even improvised piece.
The entire album is an impressive collection of experiments, of sound colllages. There are a lot of suprises. A lot of beautiful sounds and soundscapes. I really like this.

"Überall - In Terra Straniera - Borders Beyond".
Music from the other side of the fence.