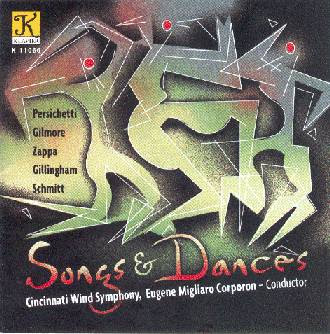 In 1992, the Cincinnati Wind Symphony recorded and released Frank Zappa's 'Envelopes' and 'The Dog Breath Variations' on their "Songs & Dances" album.
It's a very fine album and the ensemble's rendition of the Zappa pieces are very impressive.

A couple of years ago, the "Songs & Dances" album got re-released on the Klavier label. It's a re-release of the very same album, but it does have a new album cover.
The picture of this new album cover has now been added to the United Mutations Archives.