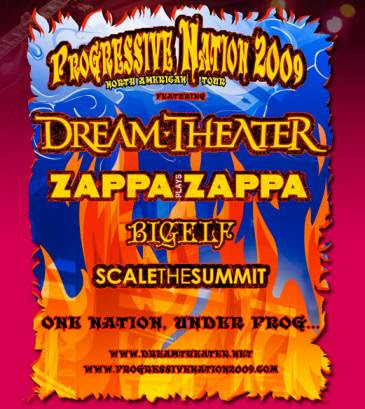 a message from Dweezil Zappa

Summer time is here and I'm sure many of you have rousing and arresting plans. If your entire summer isn't completely booked yet and you find yourself in need of a "music transfusion" perhaps you would like to visit Zappa Plays Zappa on the Progressive Nation summer tour. It's an exciting multi-act tour founded by Mike Portnoy, the drummer from Dream Theater. The concert will feature Zappa Plays Zappa, and of course, headlines Dream Theater.
Mike is a self-confessed hardcore Frank Zappa fan and he has come to several of our shows in the New York area. We were very pleased to be asked to join the impressive line up of the Progressive Nation tour. I'm personally looking forward to the opportunity to introduce Frank's music to any and all with open ears.
Our setlist will change nightly and will be 75 minutes in length. We also have three Zappa Plays Zappa Headline shows 'interspersed' throughout the tour. Keep your eyes open for any additional Headline shows that might get added.
We hope to see you at the shows!