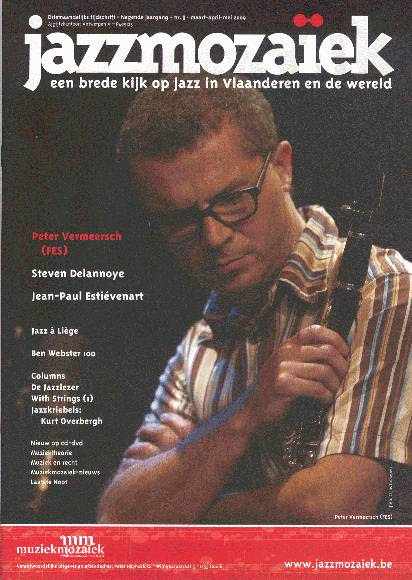 Peter Vermeersch, head of FES (short for Flat Earth Society), can be found on the cover of the latest Jazzmozaiek. The magazine carries a fine interview in which Peter Vermeersch discusses among other things the two new FES albums: "Cheer Me, Perverts" and "Answer Songs".
"Answer Songs" will be featuring compositions that were written as an answer to other songs.

For instance, Bruno Vansina wrote 'Leave Nothing' as an answer to Zappa's 'Peaches En Regalia". Corrie van Binsbergen and Peter Vermeersch wrote 'Thursday 12th' as an aswer to both the Boomtown Rats' 'I Don't Like Mondays' and Monk's 'Friday 13th'.
All performed by the Flat Earth Society.
I was able to listen to the demo for "Answer Songs", and I can already add that this will be somethings that you'll really want to hear.
Geplaatst door UniMuta op 12:20 PM