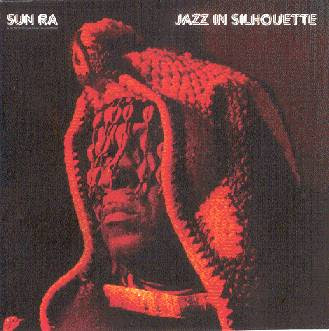 Earlier this year, Gambit Records released "Jazz In Silhouette". This CD is a re-issue of two classic Sun Ra albums: the "Jazz In Silhouette" album from 1959, and the "Sound Sun Pleasure!!" album from 1970.
Contrary to what the release-year suggests, both of these albums were recorded about fifty years ago. This new Gambit disc includes these two albums plus 2 bonus tracks, both recorded around 1958 as well.

"Jazz In Silhouette", the 1959 vinyl release was one of Sun Ra's first albums, and it includes some of the best-known Sun Ra compositions in their original, Duke Ellington-like, straight forward big band jazz approach. 'Enlightenment', 'Velvet' and 'Images' are some of my Sun Ra favourites.
Although recorded in 1958, "Sound Sun Pleasure!!" got released in 1970. It uses the same musicians (James Spaulding, Marshall Allen, John Gilmore, Pat Patrick, ...) and has the same sound as "Jazz In Silhouette", but this time it's not just Sun Ra compositions. Again, great stuff.
The two bonus tracks, 'Great Balls Of Fire' and 'Planet Earth', are both Sun Ra compositions and fit perfectly on this release, making it clock at almost 75 minutes.

This is essential Ra material.
Maybe you have the original albums, of maybe you have the Evidence CD-re-releases from 1992. If not, you really need to hear this. This is where it all came from.