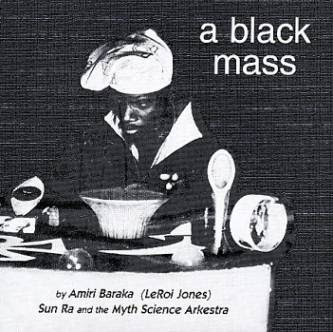 "Black Mass" is a play by Amira Baraka. Sun Ra and his Arkestra provided the (improvised) music for the recording of this piece way back in the sixties.
When the album came out in 1968, it got distributed by Amiri Baraka himself and not through the proper distribution channels. That's why the original vinyl album never was sold in record shops and why it became one of the most sought after albums in the Sun Ra discography.

In 1999, Son Boy records re-released the album on CD.
Do keep in mind that this is a recording of a play, and that the music only is there in support of the play.
Collectors and completists only.