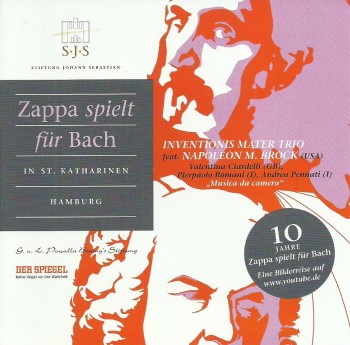 The SJS association (Stiftung Johann-Sebastian Bach) started organising the "Zappa Plays For Bach" concerts in 2008. Bands, ensembles and Zappa alumni would perform the music of Frank Zappa in support of rebuilding the organ at the  St.Katharinenkirche in Hamburg.
These concerts take place at St.Katharinen, two days before the actual Zappanale festival starts, so they're considered sort of an opener for the festival.

This was the tenth anniversary. With Inventionis Mater (including Valentina Ciardelli on double bass!) and Napoleon Murphy Brock (who performed at the first concert of the Zappa Plays For Bach series).
This is the sixth album with material from Zappa Plays For Bach and it's superb.

Andrea Pennati's performance (arranged for solo guitar) of FZ's 'Watermelon In Easter Hay' is just awesome. Pierpaolo Romani's arrangements of two pieces of Stravinsky's "L'histoire Du Soldat" are great. Valentina Ciardelli's tribute to Stravinsky (called 'Igor') is beautiful, and I'm not even mentioning all the other Zappa pieces that they performed.

Email ThisBlogThis!Share to TwitterShare to FacebookShare to Pinterest
Labels: napoleon murphy brock, others of invention, zappa