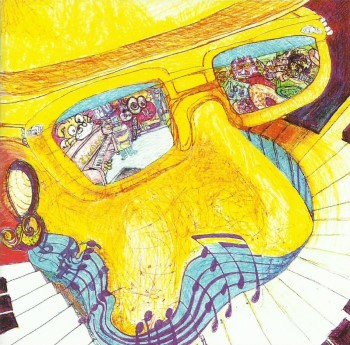 "The Poodle Magic Pig Type" isn't Fred's first encounter with the music of Frank Zappa. He recorded, toured and performed with Zappatika, Ike Willis, Denny Walley, Twister Steward and Jeff Hollie, recorded with Z.E.R.O. (the Zappa Early Renaissance Orchestra), provided tracks for the Cordelia Zappa tribute albums, AND he recorded "Fred Händl Plays Frank Zappa" in 2015, an album that should be part of everyone's Zappa collection.

And talking about albums that belong in everyone's Zappa collection, so should "The Poodle Magic Pig Type".
Fred invited a bunch of his fellow musicians and freaky friends to participate on this album and the result is magnificent.
'Dirty Love' includes a superfine guitar solo by the man that we know as a harmonica wizard, Craig 'Twister' Steward. We get a German version of 'Oh No' (great parlando job by Steffen Schindler !), 'Ms. Pinky' has Dan Cooper on vocals (wow !) with Rupert Kettle adding some fine slide guitar. 'Absolutely Free' and 'Take Your Clothes Off' are performed solo on the piano. There's a beautiful version of George Duke's 'Uncle Remus' with Steffen on vocals and Eliot Aitken going crazy on the guitar. And then there's my favourite on this album 'Any Way The Wind Blows', combining a perfect rhythm section (Kevin Crosby on bass with Prairie Prince on drums) with Fred's keyboards and the uncompromising, inimitable vocals of Mark Watson. And that's just the first 8 tracks.

I was very glad to catch Fred in concert recently, at the most recent edition of the Mosae Zappa festival, but this CD is something else. This is superb
Essential listening.

The album got released in limited (signed and numbered) edition of 100 vinyl copies (on yellow vinyl) but is also available on CD.