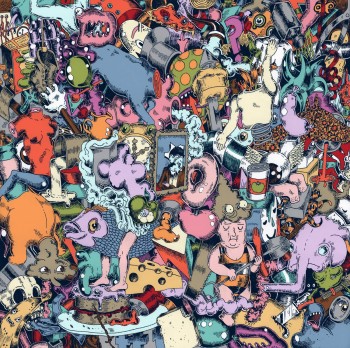 The Discogs website states the following about Alex's Hand :
"... polystylistic avant-garde, experimental rock group centered around bassist Kellen Mills and drummer Nic Barnes. It was launched in Seattle, Washington in 2011, and is currently based out of Berlin, Germany. Dabbling in everything from rock, metal, jazz, avant-grade, classical, progressive and experimental music, ALEX'S HAND has self-released three full-length studio albums, two EPs, a live album, and an album of spontaneous live improvisations."

The band performed at the latest edition of Zappanale where I caught the second part of their show (at the Mystery Stage).
Very impressive. Loved it.

The above pictured "Künstler Scheisse" album got recorded in Berlin and released through Bandcamp in 2016. The CD-version is out on the Russian RAIG record label !