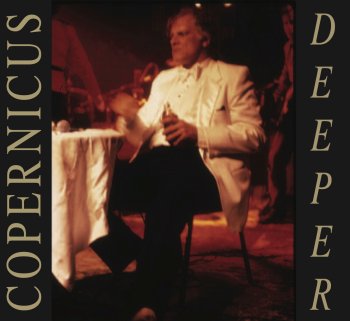 Joseph Smalkowski knows best, but I tend to disagree.
True, Copernicus tries to understand and to explain the cosmos, or the illusion of the macrocosmos as he calls it. His stories and ideas are fascinating to say the least. For Copernicus, only the atom exists.
What Joseph Smalkoswki forgets to mention is the music. The musical accompaniment is both supportive and reinforcing to Copernicus' stories.

"Deeper" is Copernicus' third album. Initially, it got released in 1987. It follows "Nothing Exists" and "Victim Of The Sky". Moonjune has now re-released this album in their reissue program.
It's a fine album, but if you'd like to give Copernicus a try, you might best do it in chronological order.

Here's '12 Subatomic Particles' from the "Disappearance" album, to give you a taste: