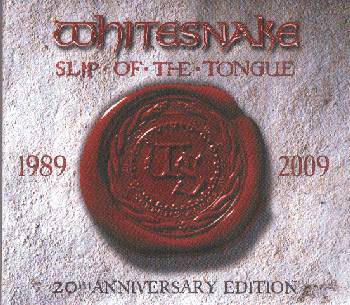 In 1989, Whitesnake released "Slip Of The Tongue", an album on which Steve Vai played an important role. Guitar wrestler Adrian Vandenberg had been injured and couldn't play, so David Coverdale hired Steve Vai to do the job.

It worked, and "Slip Of The Tongue" became a classic.
Tapping in on the 20th anniversary of this succes, EMI released a special edition last year.
The bonus material is translated into 6 bonus audio tracks, and a complete bonus video disc.

Among other things, the DVD video disc includes the three promotional videos ('Fool For Your Loving', 'Now You're Gone', and 'The Deeper The Love'), a performance (two actually) from the Donington festival in 1990.

My favourite ten seconds of this album is the opening of 'Kitten's Got Claws', where Steve lets his guitar make cat noises.
Love it!