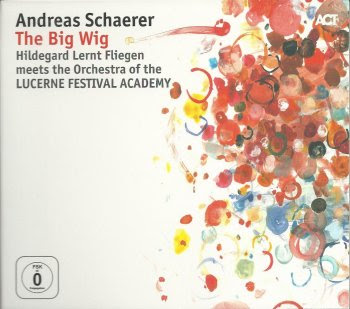 In 2005, together with five of his fellow students, Andreas Schaerer founded the Hildegard Lernt Fliegen ensemble. At the time, he was still finishing his studies in composition at the Bern University Of The Arts.
Ten years and a couple of albums later, Andreas was asked to write a piece for the Orchestra of the Lucerne Festival Academy, an orchestra that had been founded by one of Andreas' heroes : Pierre Boulez !
The result is entitled "The Big Wig", and it was performed by Hildegard Lernt Fliegen together with the Orchestra of the Lucerne Festival.
The concert got broadcast by Radio SRF, but fortunately for those who couldn't hear it (or attend), it has been made available on CD and on DVD.
Mind you, this album exists in different formats: as a 2LP album, as a CD, and as a CD/DVD package. You definitely have to go for the CD/DVD package as the performance is a joy to be heard and to be seen !!