THE UNIVERSE BY EAR - S/T 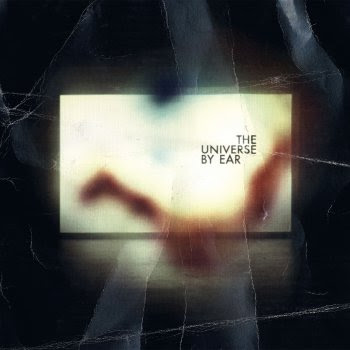 Being the melomaniac that I am, I'm always on the look-out for bands that perform the music of, or that are influenced by the music of my musical heroes : Frank Zappa, Captain Beefheart or The Residents.

Years ago, this quest brought me to Arf, a Swiss trio that featured Stefan Strittmatter on the guitar. I had seen the trio perform at the Zappanale festival in 2004 and was blown-away. The trio released four excellent albums but called it quits in 2012.

The very same Stefan Strittmatter had crossed my path again when I received the first album by Fido Plays Zappa, a Basel-based Swiss band that, as the name predicts, perfoms the music of Frank Zappa. The ensemble features Pascal Grünenfelder on bass.
The Fido sextet (or tentet when you count the horns) does a superb job. I saw them live in Germany and in Switzerland and they convinced on both occasions. They're touring Germany and The Netherlands at this very moment, I hope to see them in action again real soon.

Anyway, when I found out that Pascal Grünenfelder and Stefan Strittmatter had joined forces with Beni Bürgin to form Universe By Ear, I knew that I had to check them out.
Six months ago, the trio had already released 'Seven Pounds' as some sort of appetizer. I was impressed and very curious to hear their album.
This brand-new eponymous debut release arrived last week and is excellent.


The Universe By Ear plays energetic, contemporary guitar-oriented rock music. They have a very distinct, very recognisable sound, mixing prog and experimental influences in their rock sound. I love it.
Just take a listen to the below samples !

Available from Czar Of Crickets.
www.czarofcrickets.com