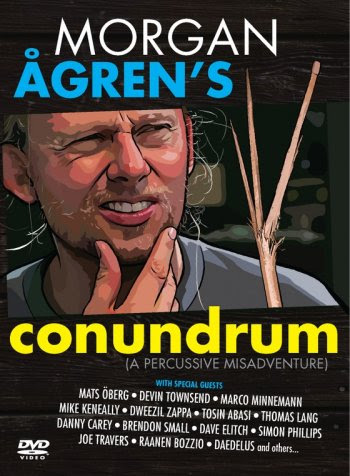 "Conundrum", the documentary that takes a closer look at Morgan Agren's musical world arrived at the United Mutations headquarters earlier this week. Actually, thanks to my participation in the kickstarter project, I even received a signed copy. Nice.
The movie itself, subtitled A Percussive Misadventure, shows Morgan Agren in his favorite environment : drumming.

A lot of contemporary musicians (Mike Keneally, Joe Travers and Dweezil Zappa to name a few) have nice things to say about Morgan Agren. There's even some footage from the Mats / Morgan appearance at one of the 1988 Zappa concerts.

I like it. It's funny and informative at the same time.