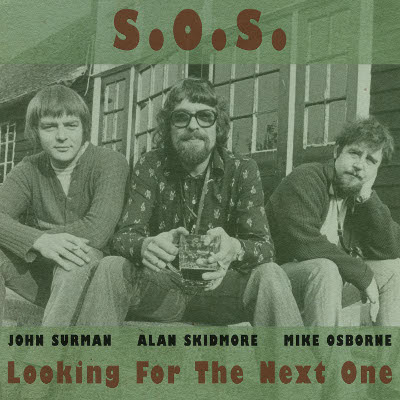 British jazz trio S.O.S. formed in April 1973 and ceased to exist at the end of 1976. During that three year period, Mike Osborne, Alan Skidmore and John Surman only released one album as S.O.S..
This self-titled LP got released on the Ogun label.

Almost 40 years later, the Cuneiform Records label is bringing the band back into the spotlight with "Looking For The Next One", a 2CD-compilation of rare and previously unissued studio sessions and live recordings.
Actually, the second disc presents the July 1974 concert that S.O.S. did at the Balver Höhle Jazz Festival.

The trio was a saxophone trio, but as John Surman also played the synth and as Alan Skidmore could also handle the drums, multiple combinations were possible.
A synthesizer, saxophones and drums.
Worth investigating.