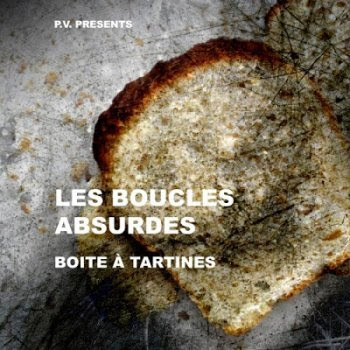 I mentioned this new album by Les Boucles Absurdes a bit over a month ago in a short newsflash. In the meantime, I've received the shiny disc and I have played it like crazy.

"Boîte à Tartines" ('Brooddoos' in Dutch, or 'Bread Box' in English) is collection of catchy melodies. All of the melodies and its variations are repeated in loops (Boucles = Loops). Performed on guitar, synthesizer and tuned percussion.
Strange Music.
I love it.

Here's what my friend Harry replied after he had given the album a listen:
"having listened to the entire "Boite a tartines" album - let me say, it's one of the craziest albums I have ever listended to in my entire life:-) But I love it -  it's funny, crazy and beautiful. Fuck - forget about the Residents, Arthur Barrow and Marcoeur influences I mentioned in my Email earlier - it's beyond categorization. I heard a lot of Marcour references throughout the album on various pieces, but not him participating on the piece he is mentioned - it's probably just a "boucle" - the ringtones he offers on his site and that's on my mobile...But I heard a lot of Trent Reznor influences on the album as well. Some songs reminded me of "How to destroy angels" - Trent Reznor's side project...Goddammit,  we fucking Germans try to analyse things over...Analyzing is - auf gut deutsch: für'n ARSCH!"