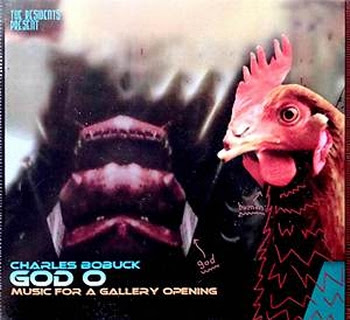 GOD O is the new CD from the Residents' own Charles Bobuck. The track "GOD O" was previously released as a digital download. Here, it is available for the first time as a physical product with three bonus tracks. Those files will be made available on the Robot Selling Device next month, but you know you want this shiny disc of plastic in its cardboard sheath. You know you do. Plus we're making it available for less than the total cost of the two downloads through RSD. Because we want you to like us.

From the disc's notes:


Artist Homer Flynn had very much liked the music, Chaos is not just a theory, that Charles "Chuck" Bobuck, composer for The Residents, had written for his art show in New York a few years back. So When his new exhibition in Oakland was announced he immediately thought of asking his friend to add some abstract sonic experimentation to the gallery opening.


Charles was excited to have an excuse to make more noise but time was short.


He did what his mother always did when she needed to clean out the refrigerator.


She would make Gado Gado, an Indonesian dish made with noodles and peanut sauce and all the leftovers in the fridge. Charles mixed up a batch of God-o for Homer's opening. He figured his job was to set a mood, and that no one would actually listen to the music since art openings are all about wine and chitchat.


Here to prove him wrong is the CD release of GOD O, music for a gallery opening.﻿
Geplaatst door UniMuta op 9:21 AM