The great thing about the Zappanale warm-up parties / concerts, is that everybody knows that it’s the place to be. If you’re already in town on Wednesday or Thursday, you can do whatever you want, wherever you want, but late afternoon is the time to go to the Kamptheater.
Killmenoc kicked off Wednesday on the outside Truckstage, followed by Oozin Goo. I didn’t catch any Oozin Goo, however, as Chris Opperman was to do a (last minute announced) concert inside the Kamptheater.
Chris played a 40-minute set, and was joined by Elizabeth Cary on violin on a couple of tracks. 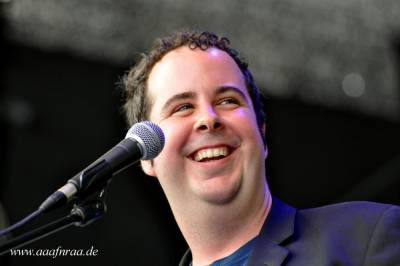 Inside the Kamptheater, I also saw a video & soundcollage by Tonlast, in tribute to Don Van Vliet.
Unfortunately, the video snippets and pictures were a bit blurry. Disturbingly blurry, but I did like the soundscapes. I heard a lot of free jazz, noise, Residents-like music, and more. I’m not 100% sure that this was on Wednesday. Could have been Thursday as well...
Hot Fur was also scheduled to perform on Wednesday. Outside, on the Truckstage. And they did. And just didn’t catch any of it as I was talking to friends. From a distance, I could hear that they sounded pretty good and that they included at least one Zappa composition in their set.
End Day One.