This review needed a couple of modifications, so instead of changing the old entry, I made a new one (and deleted the previous one) 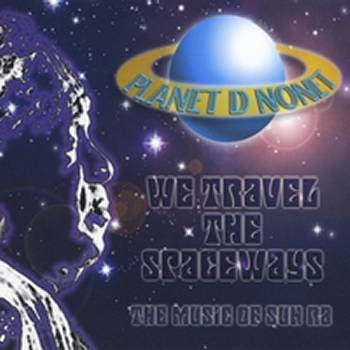 The Planet D Nonet is a Sun Ra tribute band from around Detroit (planet D). Founded in 2007, the band has done a series of annual Sun Ra tribute concerts, each time with a special guest.
In 2009 the band featured professor of Jazz Studies at the Brooklyn College Conservatory of Music, Dr.Salim Washington on oboe and on tenor sax.
In 2010, avant-garde saxophonist and ICP-member Kenny Millions guested with the band.

The Planet D Nonet is lead by James O’Donnell and RJ Spangler. In the liner notes, Rick Steiger and RJ Spangler explain how the both of them started listening to Sun Ra's music over thirty years ago. It’s a fine description of how they became Ra-ophiles, and how they started to play Sun Ra's music. A great story.

On "We Travel The Spaceways: The Music Of Sun Ra", the Planet D Nonet performs an exquisite selection of tunes.

Disc one opens with 'Velvet', a classic Sun Ra tune', followed by the Hobart Dotson penned 'You Never Told Me That You Cared' and 'Enlightenment'. We get beautiful arrangements with impressive solos. Side one continues with 'Interstellar Low Ways', another composition that emerged from the 1950's. This is my favourite track of side one. It has a perfect pace and, again, great solos, featuring Salim Washington.
Next up is (another excellent arrangement) of 'Love In Outer Space'. Both 'Love In Outer Space' and the subsequent 'Kingdom Of Not' were arranged by Brian Casey.
Disc one rounds up with another and quite different version of 'Interstellar Low Ways', and with a high-energy 'Ancient Aiethopia'.

Whereas disc one was recorded in 2010, disc two takes us back to 2009. Firm versions of 'Saturn' and 'Kingdom Of Not', plus the exuberant 'Ancient Aiethopia' set the tone. Again, excellent arrangements combined with fine solos.
'Love In Outer Space' and 'Lights On A Satellite' follow, and show the added value of Kenny Millions. This is great. Really great.
The party continues with a great swing version of 'King Porter Stomp / Big John Special'. And disc two ends with another vigorous 'Ancient Aiethopia'.

Fellow Saturnians, you really need to hear this.
"We Travel The Spaceways: The Music Of Sun Ra" is a great album.
This is a must-have.