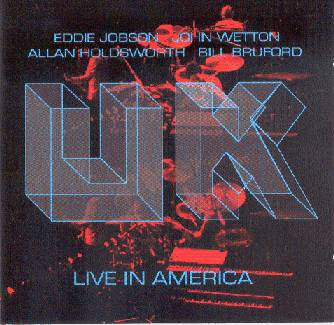 Featuring members of Yes, King Crimson, Uriah Heep, Curved Air, Roxy Music and Soft Machine, UK was one of the most prominent progressive rock supergroups of the late 70's.
The short-lived band got founded in 1978, but Holdsworth and Bruford left after one album, with former Terry Bozzio replacing Bill Bruford on drums.
This new line-up released "Danger Money" in 1979 and followed the album with a tour. Once the tour was completed, the band broke up.
The posthumous live album "Night After Night" was released shortly afterwards.

Several live albums got released afterwards. Both bootlegs and genuine albums.
"Live In America" belongs to the latter series.

Recorded live in Boston in 1978. Excellent concert. Excellent recording.
Includes bonus live material from a John Wetton concert on which he played some UK material.

A nice addition to the UK discography.
Geplaatst door UniMuta op 7:26 AM