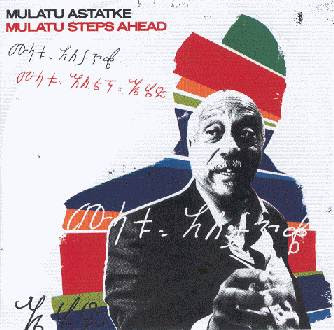 It has only been a couple of weeks since I talked about the impressive "Inspirations Information 3" album where Mulatu Astatke teamed up with The Heliocentics. A 2009 release.

Brand-new is "Mulatu Steps Ahead", on which Mulatu shows why he is considered a musical innovator. His mix of 60's jazz, latin rhythms, ethiopian afrobeat and eastern music scales is quite overwhelming.

On "Mulatu Steps Ahead", Mulatu Astatke combines beautiful melodies with a hypnotic groove, including polite nods to a couple of well-known jazz riffs and phrases.
It may sound as a cliché but you can hear that Mulatu Astatke was born in Ethiopia, got his musical education in London, went to the Berklee College Of Music in Boston afterwards, and that he has experienced playing and performing with some great jazz musicians.

Great solos as well. Mulatu on vibes, and Byron Wallen (wow!!) on trumpet!!

Out on Strut Records.