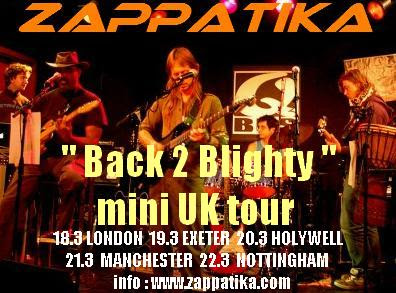 - - - ZAPPATiKA's first UK tour in March - - -
With a new line-up , a new album out ,a forthcoming 'virginal' UK tour in March and then a tour of Germany ,ZAPPATiKA , a 6 piece international ensemble with a Brit front-man and all living in Amsterdam, are busy boys !

A blend of lead guitarist/singer Mcinnes' own compositions and some very strong influences from genius Rock-composer Frank Zappa , the music is versatile, often complex, where possible funny and often very exhilirating....for the band and the audience !