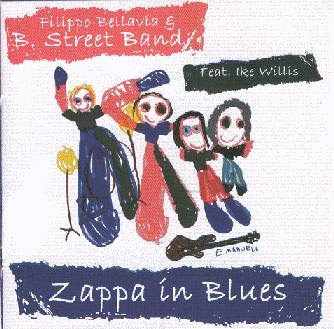 Guitarist Filippo Bellavia is the father of Martin, Ruben and Emanuela.
Martin and Ruben are part of Ossi Duri, the italian band that has recorded several albums playing the music of Frank Zappa.

Together with his sons Martin (guitar) and Ruben (drums), and with the help of Simone Bellavia (bass), Filippo recorded "Zappa In Blues", and album on which he plays a number of bluesy Zappa compositions.

Guesting on 'Bamboozled By Love', is former Zappa-sideman Ike Willis.

Filippo explains in the CD booklet: "Frank Zappa's music has been my soundtrack since the age of fifteen, the lullaby sung to my three children..." and
" Zappa In Blues can be said to be the fruit of my 'compulsive-obsessive disorder' ".

The result is great. This album shows that Zappa knew his blues classics, and that he could write a nice bluesy track himself. Filippo and his B. Street Band made a nice selection and did a great job performing these tracks.