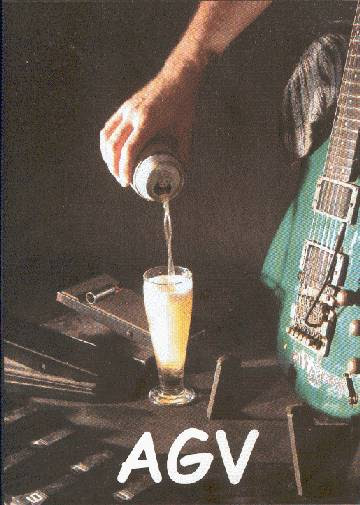 Rainer Tankred Pappon was born in the city of São Paulo, 1961, and he plays guitar and bass. He grew up listening to the good sounds of the 70's, such as Frank Zappa, King Crimson, Egberto Gismonti, Mahavishnu Orchestra, Hermeto Pascoal, Focus, Yes, Gong, Jeff Beck and others.

He has played with many Brazilian artists and also plays the lead guitar in The Central Scrutinzer Band, a band from São Paulo, Brazil, that performs the music of Frank Zappa. Look a bit below for a review of their first and brand-new "Live In São Paulo" DVD album.

"O Alemão Da Guitarra Verde", or "AGV" is the latest release by Rainer Tankred Pappon.
For "AGV", RT teamed up with his brother Jimmy, and with a bunch of his friends from the Central Scrutinizer Band. The result is an eight-piece band perfoming Rainer Tankred's compositions.
The result is a a video recording of an excellent concert, spiced up with some rehearsal fragments.

This recording counts 7 fine compositions, 6 of which have been previously released on RT's first album (from 1993 !!)
The material still sounds fresh, and the arrangements for the 8-piece bands sound a lot like Zappa's 1988 band. I love it.
RT doesn't have to convince me, I was already a fan of his music.
After listening to "AGV" for the third time this last couple of days, I only hope that I'll be able to see them live one day !!