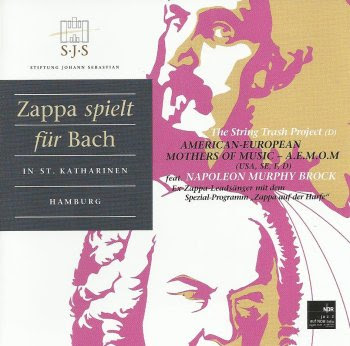 July 2014 had the String Trash Project and the American-European Mothers Of Music performing at the St Katharinenkirche in Hamburg as the opening concert for the Zappanale festival.
The String Trash Projects is Siglinde Koch-Sembdner on harp, backed by Peter Görs on guitar and Mick Zeuner on bass.
The American-European Mothers Of Music was a one-time project with Napoleon Murphy Brock on vocals, saxophone and flute, Mats Öberg on keyboard and harmonica, Benoît Moerlen on marimba and vibes, and Siglinde Koch-Sembdner on harp.

I happened to be at this concert and I remember remaining a bit dissatisfied.
The String Trash Project opened the concert and although Siglinde Koch-Sembdner sounded great on the harp, the guitar / bass accompaniment wasn't always flawless.
The second band, the A.E.M.O.M., did have the perfect line-up with former Zappa sideman Napoleon Murphy Brock on vocals and sax, with keyboard and harmonica wonder Mats Öberg, with marimba and vibes player Benoît Moerlen who has performed lots of Zappa material with French band Peach Noise, and with Siglinde Koch-Sembdner on harp, but they only performed four Zappa tunes...
The A.E.M.O.M. did open their set with a superb mash-up of Frank Zappa's 'Chunga's Revenge' and Wayne Shorter's 'Armageddon', but I could have done without the Albert Hey Melotte, Erik Satie, Frank Losser, Bernard Andrés, Kurt Weill, J.S.Bach and Anthony Newly pieces.
Don't get me wrong. I'm not someone who only listens to Zappa's music, but with this line-up...

Anyway, this "Zappa Spielt Für Bach" album does present two fine performances of the String Trash Project, and it does include an excellent concert by the A.E.M.O.M.