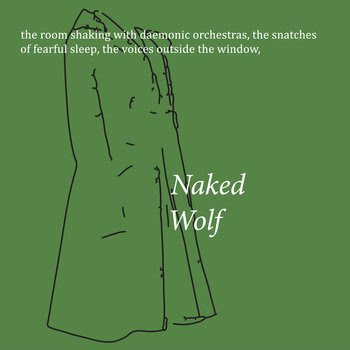 November 2014, El Negocito Records released this eponymous album by Naked Wolf.
The front cover of the album reads "The room shaking with daemonic orchestras, the snatches of fearful sleep, the voices outside the window." which gives the unprepared listener an idea of what to expect.
Naked Wolf is an international sextet, featuring Yedo Gibson (Brazil) on reeds, Ofir Klemperer (Israel) on piano, ms20 and vocals, Felicity Provan (Australia) on trumpet and vocals, Mikael Szwafirowski (Finland) on electric guitar and percussion, Gerri Jäger (Austria) on drums and percussion, Luc Ex (The Netherlands) on acoustic bass, and Seb El Zin on vocals.

The music of Naked Wolf is experimental and improvised but does carry some catchy melodies and a danceable groove. Add some angular rhythms and some repetitive, hypnotic phrases and you'll get the idea.

This is right up my alley!

Out on El Negocito Records.
Check it out at http://elnegocito.bandcamp.com/album/naked-wolf