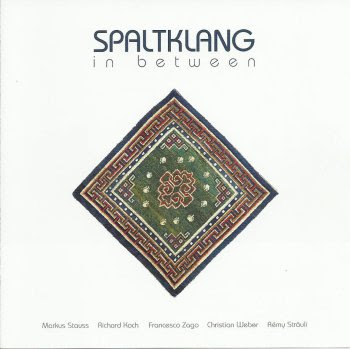 The italian Altrock record label keeps popping up in these pages. Earlier this year, the label released Alter Huevo's "Cucamonga" album with Zappa-inspired music from Argentina. The latest Humble Grumble disc, "Flanders Fields", is also out on Altrock.
And now there's Spaltklang's "In Between", another fine addition to the Altrock catalogue.

It has been three of four years since Spaltklang released "En Suite". For this new release, bandleader and composer Markus Stauss changed the line-up and the setting quite drastically.
In his own words: "The music has a different sound because of the new instrumentation. The composition technique is quite the same as on the last 2 Spaltklang albums. I just had more possibilities thanks to the 5 piece line up."

Besides Markus Stauss (tenor and soprano saxophones) and Rémy Sträuli (drums), the quintet is made up of trumpet player Ritschke Koch, guitarist Francesco Zago (Yugen, Zauss) and double bass player Christian Weber (Kurai). The expansion of the ensemble does indeed have a postive effect on the overall sound.
"In Between" is a very impressive album. Each of the five musicians stands out. Each one has a disctinctive voice and fits perfectly into the whole.
I love it. I love the intensity of the drive and the dynamics of the improvisations.
If you are familiar with Markus Stauss' output, you know that you will have to check this out.
Highly recommended to fans of experimental rock / jazz-rock / modern jazz music.