Belgium has big band of which all the musicians are children. These kids are somewhere in between 9 and 16 years of age, and hail from Brussels, Liège and Leuven. Especially this last part is interesting as it means that the big band collects musicians with a different mother tongue.
Believe it or not, but this big band is called Zappa. As bizarre as it seams, the name has, as far as I know, nothing to do with our favourite composer.

The Zonzo Compagnie invited Dutch guitar player and composer Corrie van Binsbergen to share the stage with the Zappa big band.
For the occasion, Corrie reworked the Odysseus saga into a roadmovie for which the Zappa big band would provide the soundtrack.

Last Saturday, Corrie and the Zappa big band, were presented as "Corrie en de Kleine Brokken". A play on her "Corrie en de Grote Brokken" band, where 'klein' translates as 'little', or 'small'.
The piece itself was fascinating. Three girls told the story (in both dutch and frech) while the children were asked to make music outside their usual boundaries. Besides playing music, they also had to shout, to dance, and to make weird noises with their instruments. It was fun.
In support of the Zappa big band, Corrie had not only brought her guitar along. She had also invited percussionist Alan Purves. Beautiful.

Fun was had by all. 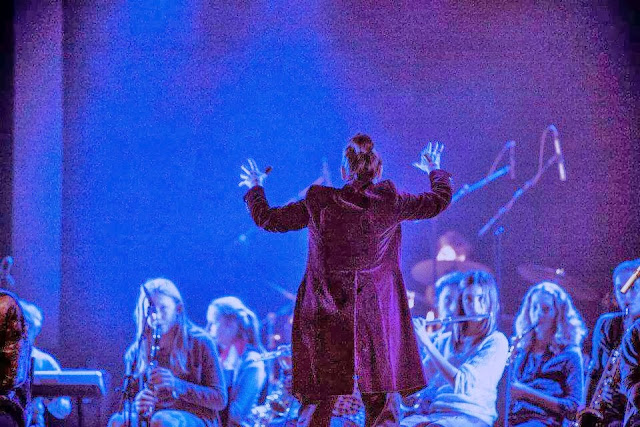